A universal truth: Given a pen and a paper, girls will draw girls and boys will draw cars.

Sophie Blackall has experienced this phenomenon in many countries, including her own native Australia, here in the United States and in remote third-world school rooms where children may have never before made a mark on paper. Her work with Save the Children has allowed Sophie to leaver her stories, pictures, and heart in several countries, in many classrooms, and with countless children around the world.

The first book Sophie ever bought with her own money was a 1925 copy of Winnie the Pooh after polishing steps for ten cents apiece to earn the dollar needed to take the beloved book home with her. Recently, when she was sent a manuscript titled Finding Winnie: The True Story of the World’s Most Famous Bear, she knew it was the illustrating opportunity of a lifetime. 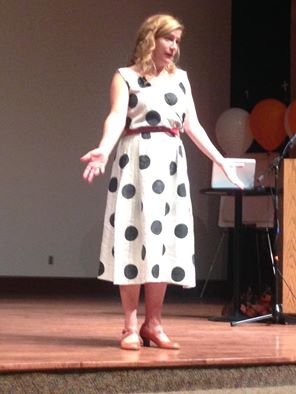 It didn’t but a few minutes for us to know, Sophie is a “details gal.” Each of her books is rigorously researched via travel, museum visits, digging into archives and asking questions. Tough questions. Questions about details that often lead to re-drawing a scene, reimagining a sketch, or making even greater changes to a painting that may or may not have been previously completed.

There is so much more to tell you. Sophie packed a day’s worth – no, a week’s worth – of wisdom into one short keynote address. Here are a few bits of wisdom I’m still pondering:

Letting one story end so another can begin is how we deal with change, moving from one chapter of life to another.

“Can you tell me a story?” and “Once upon a time…” are two of the best lines we have.

Think about that for a bit.

And….   the morning isn’t over yet. Because Charles Santore has taken the stage.

Sometimes the you just don’t mess with the classics. But sometimes – if you’re Charles Santore –  you do.

Charles Santore’s first opportunity to illustrate children’s books came in the 1980s when Beatrix Potter’s legendary tales came into the public domain. At the time, he didn’t realize quite how hallowed was this ground upon which he would walk. But he handled the work with such delicate care, and the book launched a new phase in an already successful career. 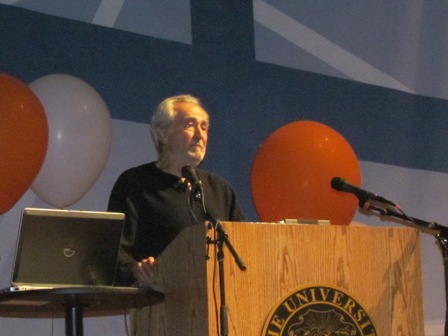 Santore has remained enamored with the classics. He’s illustrated, among others, The Wizard of Oz, Aesop’s Fables, and the soon-to-be-released Alice in Wonderland.  Santore tells us that he reads and rereads the classic texts until images of his own begin to form in his head, and he knows he’s ready to sketch. Since the classics have already been illustrated time and time again, Santore’s challenge is create a new and unique version, which he manages with amazing genius. Careful composition contributes to the intense emotional qualities of each drawing – intimidation, elation, suspense, wonder, anticipation, desperation. 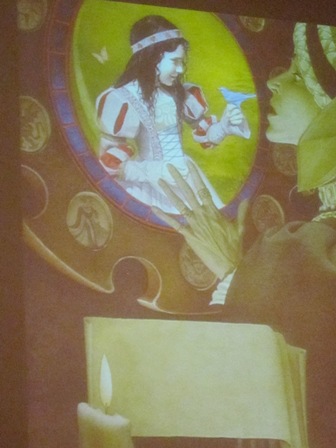 Mazza attendees were in for such a treat when Charles Santore shared Paul Revere’s Ride.  Santore’s hushed voice read Longfellow’s rhythmic lines while his vibrant and detailed paintings kept time on the large screen. We were awestruck. Mesmerized. Privileged to be in the room. Blessed.

Just as when Sophie Blackall had finished speaking, I found that by the time Charles Santore was exiting the stage, my notes had trickled off. While I had been writing furiously, somewhere along the line, I’d stopped to just listen and look and take it all in.

So I’m going to stop now and say: It was incredible. Sometime you just have to be there.

Mark Teague will be here this afternoon!