Home /
Warning: Use of undefined constant multiple - assumed 'multiple' (this will throw an Error in a future version of PHP) in /homepages/2/d259951597/htdocs/new_site/wp-content/themes/Minamaze_Pro/admin/main/options/00.theme-setup.php on line 178
A Country Mile • Books and Authors • A Country Mile • Out and About • A Country Mile • Uncategorized / Mazza Tuesday

Just in case you’ve been sleeping …  I’ve been in Findlay, Ohio this week attending the 2012 Mazza Summer Institute.  And just in case you’ve had your head in a hole in the ground, Mazza is the world’s largest collection of art from children’s literature. And the funnest place on the planet. Especially this week.

So here’s how the day started. 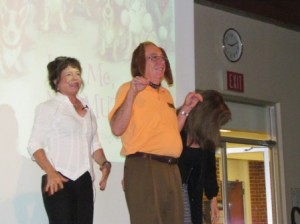 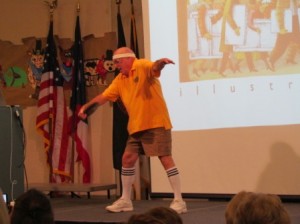 Illustrator Janet Stevens returned to the Mazza Museum today, an encore to her 2005 appearance.  This time, her sister, Susan Stevens Crummel (a.k.a.Miss Prissy Pants) came along to defend her reputation as the “neat” one.  Susan and Janet’s tag-team approach to both creating books and presenting leaves readers and audiences in stitches. 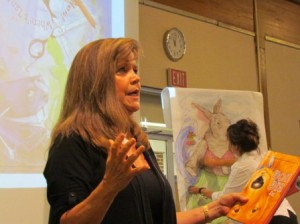 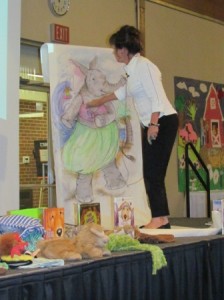 One lucky conference attendee got to take that elephant home today. (No jealousy noted there. Why? Did you sense jealousy? Of course not. Really. Not a drop. Really.  Can we just let this go? Geez.)

After lunch illustrator Boris Kulikov wowed the crowd with his first-ever keynote speech.  Boris is a native of the former Soviet Union, living now in the United States.  Kulikov attended art school in St. Petersburg before moving to New York City where he illustrated for the New York Times among others.  He began illustrating children’s books in 2003 with Morris the Artist and has since illustrated many books including the Giants of Science series with Kathleen Krull. The hysterical highlight of the presentation? A story called Fartiste about a master of, well, gas passing.  And it’s a true story.  I’m serious.                       A. True. Story.  With charm and talent, Kulikov contributes generously to both the conference and to the world of children’s literature. 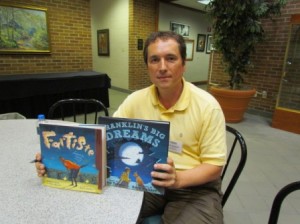 All this and tomorrow is only Wednesday!  *Sigh*