Home /
Warning: Use of undefined constant multiple - assumed 'multiple' (this will throw an Error in a future version of PHP) in /homepages/2/d259951597/htdocs/new_site/wp-content/themes/Minamaze_Pro/admin/main/options/00.theme-setup.php on line 178
A Country Mile • Books and Authors • A Country Mile • Out and About • A Country Mile • Uncategorized / Mazza Monday

Well, the first day of the 2012 Mazza Summer Institute has come and gone.  And what a Monday!

The first keynote speaker?  Carmen Bernier-Grand, three-time winner of the Pura Belpre Award and a tiny powerhouse of encouragement and inspiration.  As a child, Carmen was scolded by her older sister for staring at people, but Carmen couldn’t help it.  She knew that, while she could see what others see or smell what others smell, she could never think their thoughts.  She believed that perhaps she could get into another person’s head if she only stared long enough, hard enough.  Well, Carmen stared down her audience today, and then confessed that no matter how hard she tried, she could not access the stories in our minds.  They’re ours, she reminded us.  And what a shame it would be if they were never told.  So, get out your pens, Carmen says!  And share the experiences that are only yours to share.  Beautiful, Carmen! 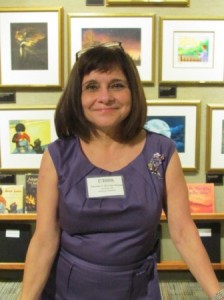 After lunch,  Dan Yaccarino took the Mazza stage and entertained the audience with stories of a high-spirited childhood which led initially to a few trips to the principal’s office and eventually to art school and a successful career in illustration.  Dan is the creator of more than 50 books and numerous animated commercials and television shows, including The Backyardigans on Nickelodeon and Willa’s Wild Life on NBC.  Dan admits that if it weren’t for one three-letter word, he wouldn’t be where he is today.  That word? YES!  Never backing away from a challenge, Dan has approached new projects with an affirmative attitude.  So thank you, Dan, for saying YES to Mazza’s invitation.  We wish you many more opportunities to say YES in the future. 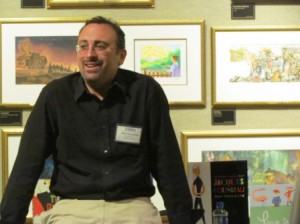 And finally, the day wouldn’t have been complete without a few laughs, a bit of silliness, and the antics we’ve come to expect from our Mazza hosts.  Here Mazza Director Ben Sapp briefly tries his hand at stand-up comedy.  Have you ever wondered how a hospital elevator and a trip to an amusement park are similar? 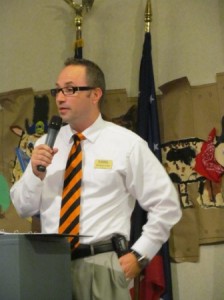 You’ll have to ask Museum Curator Jerry Mallett for the answer to that question.

Don’t go far.  Mazza Tuesday is coming with the sunrise!