Home /
Warning: Use of undefined constant multiple - assumed 'multiple' (this will throw an Error in a future version of PHP) in /homepages/2/d259951597/htdocs/new_site/wp-content/themes/Minamaze_Pro/admin/main/options/00.theme-setup.php on line 178
A Country Mile • Books and Authors • A Country Mile • Out and About • A Country Mile • Uncategorized / Mazza Wednesday 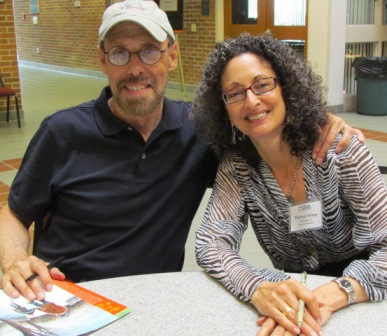 It’s midweek at the Mazza Museum!

So, let’s not waste a moment getting to the highlights of this event-packed day.  The morning began with a delightful keynote address given by Florence Minor.  While her previous Mazza appearances have been as her illustrator/husband’s sidekick, today Florence addressed an audience eager to learn more about her life and her work as an author.  After briefly considering farming and becoming a cat whisperer, Florence concluded that collaborating with her husband might not be a bad idea after all.  The two have created several books together, including If You Were a Penguin, which earned the Pennsylvania One Book, Every Young Child Award.  What a joy to hear from the woman behind the familiar smile! Thank you, Florence!

When Wendell took the stage we learned that he hasn’t exactly been goofing off since his last trip to Mazza.  No, Wendell has completed an impressive list of books, appeared all over the country, been awarded an honorary doctorate, and is preparing for an extensive exhibit at the Norman Rockwell Museum beginning November 13, 2012.  As always, we sat mesmerized by the images of Wendell’s art flashing before our eyes on the big screen – bison and eagles, passenger trains and space ships, Walden Pond, Galapagos Island.  Every picture transported us to another time and place.  But the most moving moments of the morning were those spent in memory of Jean Craighead George, whose recent passing leaves an immeasureable emptiness in the world of children’s literature.  Wendell’s fond tribute left few eyes dry and brought the audience to their feet in memory of, no – in honor of – Jean.  Though she’s gone, how joyful it is to know that her words live on, spoken from the lips of young children every time they pick up a Jean Craighead George book and begin to read. 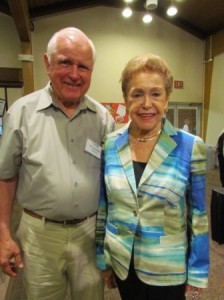 No, it’s not my Aunt Mary and Uncle John.  Though after spending the afternoon with them, I feel they could be.  It’s a little tricky because this guest isn’t one you immediately associate with children’s literature, and she is not an illustrator.  Give up?  I thought so… 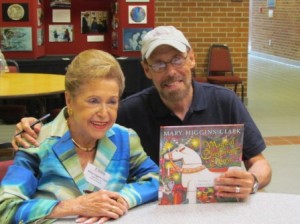 It is Mary Higgins Clark who, in addition to the hundreds of novels you’ve likely read, has also collaborated with Wendell Minor on two lovely picture books. Ghost Ship transports us to Cape Cod in a modern-day tale of a long-ago boy who served a sea captain and lost a small treasure.  The Magical Christmas Horse also blends past and present when a family spends Christmas vacation at a storied New England farmstead and discovers what they once believed was lost forever.   In her keynote address and breakout session, Mary shared decades of writing experiences with such poise and humor, we all felt we’d just been reacquainted with a beloved family member.

I’ve been attending Mazza events for more than a decade. From each presentation, I always carry away a nugget of something I’ll treasure.  An image. A phrase.  A quote.  Perhaps a spark.  Today’s nuggets were too numerous to carry.  I’ll have to haul them away in the U-haul truck in my brain.  And unpack them one by one.  This could take awhile.