Home /
Warning: Use of undefined constant multiple - assumed 'multiple' (this will throw an Error in a future version of PHP) in /homepages/2/d259951597/htdocs/new_site/wp-content/themes/Minamaze_Pro/admin/main/options/00.theme-setup.php on line 178
A Country Mile • A Country Mile • Books and Authors • A Country Mile • Out and About / My Teacher Once Told Me… ...

My Teacher Once Told Me…

This is the last in a series of blog posts from the Mazza Museum’s Summer Conference.

Oh, yes. There’s been a lot of laughter. And few tears. Because that’s what happens when passionate people come together with open minds and open hearts, ready to listen and willing to learn.

It’s not unlike a classroom. A good classroom. Where a teacher is invested in children.

And that’s where I found one more common thread in this week’s artist/illustrator presentations. The teacher.

On Tuesday, Lynne Avril told us her sixth grade teacher made her see herself as an artist, inviting her paint with watercolors over her lunch period.

On Wednesday, Loren Long shared that one of his teachers called him the “class illustrator.”

On Thursday, Aaron Reynolds revealed how his fifth grade teacher read Ramona the Pest aloud to the  class and everything changed.

Nearly every day, we’ve heard stories from Dr. Jerry Mallett about teachers and their impact upon the lives of children. 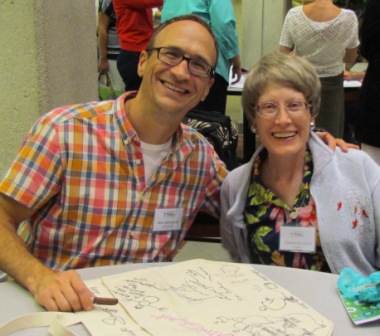 Of all the teacher-as-my-encourager stories we’ve heard, Mike’s perhaps came at the earliest age. It was his Head Start teacher who, on his written report card, praised him for learning not to hit other children and for his drawing skills. She also told him that she hoped he would continue to development that skill.

In high school, another teacher planted in Mike’s mind the idea that with hard work, art could be a career.

Many years later, Mike’s hard work earned him a four-year scholarship to Savannah College of Art and Design. He hadn’t been in Savannah long when he attended a lecture on illustration given by David Shannon. Immediately after, he declared his major would be illustration.

What followed was the career in art that Mike’s teacher had said was possible. Editorial illustration, sculpting, magazine illustration, and then, finally children’s book illustration.

Mike has illustrated 20 books, including the first he authored himself, Little Puppy and the Big Green Monster. 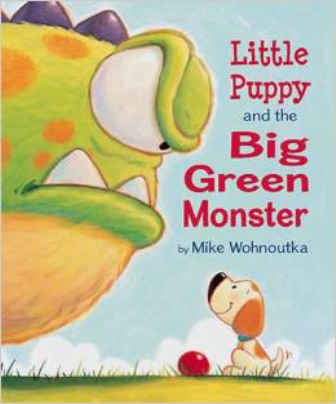 Recently, his book Moo has won several prestigious awards, including one that will put the book into the hands of 15,000 Minnesota Head Start students. Perhaps one of those students will have a teacher who will encourage him to develop his art skills.

We’re glad Mike had a teacher who did just that. (And we’re also relieved that he learned to stop hitting others. He’s turned into such a nice young man.)

just to be absolutely certain we didn’t completely miss the idea that a teacher’s influence can be life-changing, David Slonim shared these words:

“I had an elementary art teacher who nurtured a gift she saw in me.  She started a fire that’s still burning.”

Now David Slonim is teaching young children at school visits. What is he telling them? Well, mostly things we all need to hear. 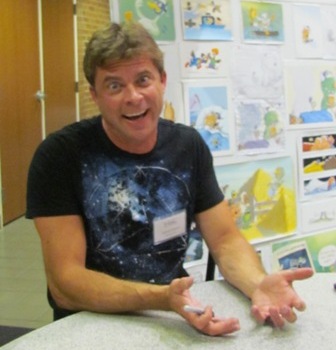 Be ELATED to be where you are – in this case, David Slonim was elated to be at the Mazza Museum.

And, talent is the willingness to keep trying until you get it right.

And, the reward for good work is more work. And that’s a good thing.

And, relationships are everything.

And, treasure is always buried.

And then, there was this thing he kept saying about constraints. And that within constraints, creativity thrives. And I’m sitting in my chair, thinking…..

Because I’ve always thought constraints were … um … constraining. Obstacles. Barriers. This Slonim guy had my attention.

Constraints, he contends, are parameters. And we can do amazing things within a defined space. Constraints define. Constraints are not restrictive, rather they free us to do our best work.

And when we do good work with small things, we are entrusted to greater things.

Now I get it. I totally do get it. And it just may change the way I think from now on.

But, undaunted, he went to work. And with some help… 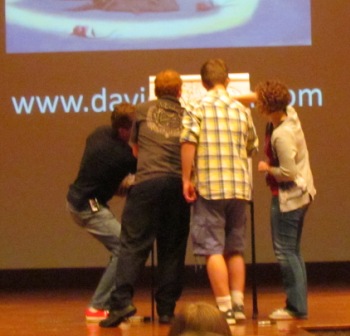 … he proved that creativity really does thrive within even the most constraining constraints. 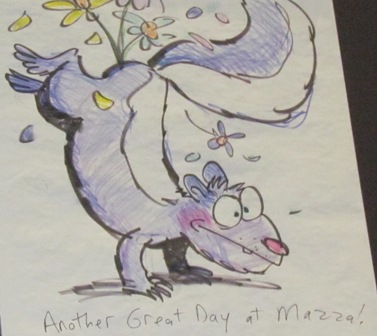 Indeed, it was another great day at Mazza.

It was another great week at Mazza.

Next time, you don’t have to rely on me to tell you. Come see for yourself.*