Home /
Warning: Use of undefined constant multiple - assumed 'multiple' (this will throw an Error in a future version of PHP) in /homepages/2/d259951597/htdocs/new_site/wp-content/themes/Minamaze_Pro/admin/main/options/00.theme-setup.php on line 178
A Country Mile • A Country Mile • Books and Authors • A Country Mile • Out and About / Kazumpets and Other Powerful I ...

Kazumpets and Other Powerful Ideas

It’s Wednesday morning at the Mazza Museum. The room is full. And there’s an enormous hand entertaining us. 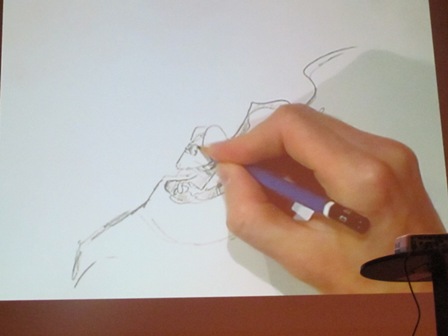 The hand is attached to an arm and the arm belongs to David Hyde Costello.

When I was young, my sisters and I would entertain ourselves by folding a blank page of paper into 8 squares then making a random scribble mark inside each square. Then we’d swap pages and try our best to turn each scribble into a recognizable drawing. I remember once we told a teenage babysitter we wanted to play The Scribble Game, and she said, “What’s that?” I was completely stunned. I thought everyone played The Scribble Game!  Today, we’re playing The Scribble Game with David Hyde Costello. Wait until I tell my sisters!

David uses the game with young folks to demonstrate the spontaneity of imagination. Even before he knows what the marks of his pencil are going to become, he’s putting down lines and shapes until suddenly ideas form and what was once a scribbled line becomes a picture and then a story. David’s favorite part of the book creation process is the very beginning when he is focused and forming ideas.

Check out three of David’s newest books:  Little Pig Joins the Band, A Crow of His Own and I Can Help. 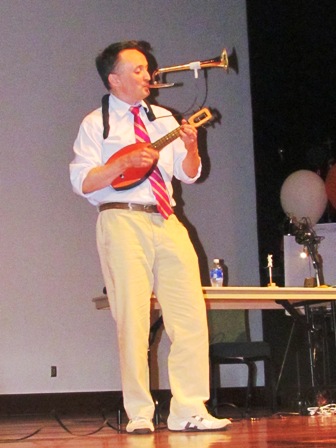 The multi-talented David Hyde Costello plays the kazumpet (his creation) and the ukulele.

It’s going to be a great day!

Rafael Lopez is on his way to the stage! And who knew? He’s a ukulele master as well!

“Storytelling is a powerful way to put ideas out into the world.” ~ Rafael Lopez

Rafael Lopez’s parents were architects who instilled in him a love of art while growing up in Mexico. He loved books for their words, their art, and the smell and feel of great leather cover.  As a young man, he fell in love with travel because it exposed him to new sights, languages, tastes and people. It’s no surprise he found a career in children’s book illustration.

Drum Dream Girl, written by Margarita Engle, is Rafael’s newest book and is the true story of a young girl who became a world-famous percussionist at a time when girls weren’t permitted to play the drum. 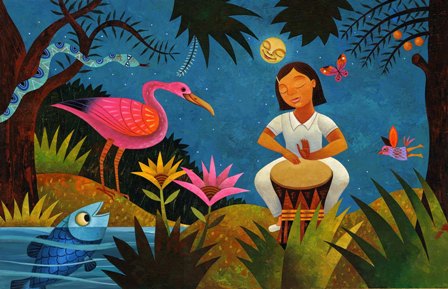 He makes it look so easy, but Rafael admits that mastering the use of color is one of his biggest challenges.

Rafael Lopez is changing the world of children’s literature with his books, but he’s also changing the lives of families who live in cities across the United States. In his own San Diego neighborhood and in Chicago, he’s leading crews of children and parents as they paint bright and beautiful murals on gray and dirty inner city walls. He is, essentially, bringing his art into real life. 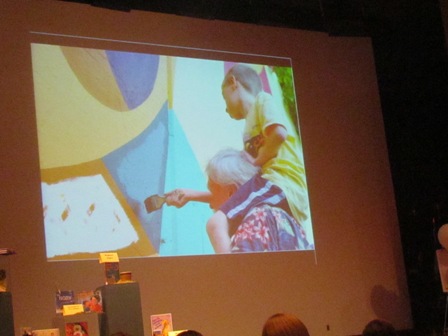 But the story doesn’t stop there. In a lovely twist, Rafael’s mural-painting caught the attention of two writers, F. Isabel Campoy and Therese Howell, who created a picture book manuscript titled Maybe Something Beautiful.: How Art Transformed a Neighborhood. The book, illustrated by – who else? – will be released in the Spring of 2016.

I was right. It is going to be an amazing day!

Come back this afternoon. I know I will!