Home /
Warning: Use of undefined constant multiple - assumed 'multiple' (this will throw an Error in a future version of PHP) in /homepages/2/d259951597/htdocs/new_site/wp-content/themes/Minamaze_Pro/admin/main/options/00.theme-setup.php on line 178
A Country Mile • Books and Authors • A Country Mile • Out and About / Telling the Truth 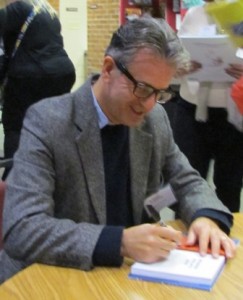 Perhaps one of the most important speeches of the Mazza Fall Weekend, Eugene Yelchin shared a childhood that no American child could possibly understand if not for his willingness and ability to share it in words and pictures.  Eugene Yelchin’s Breaking Stalin’s Nose won a Newbery Honor in 2012. The book’s emotional ties to Eugene’s Russian Jewish childhood are woven throughout, bringing to young readers a world previously unknown.

Eugene Yelchin’s many picture book illustrations are all quite different, reflecting a diversity of style not typical of every artist. With three new books forthcoming in 2014 and 2015, it’s safe to say we have a lot to look forward to!

Deeply emotionally connected to his artwork, but not sentimental about it, Eugene Yelchin understands the hard work behind the final product the rest of us see.  He believes that art is undeniably connected to truth. And to be allowed to share the truth is a gift.

Truth is, Eugene Yelchin’s presence at the Mazza Weekend Conference was a gift.