Home /
Warning: Use of undefined constant multiple - assumed 'multiple' (this will throw an Error in a future version of PHP) in /homepages/2/d259951597/htdocs/new_site/wp-content/themes/Minamaze_Pro/admin/main/options/00.theme-setup.php on line 178
A Country Mile • Books and Authors • A Country Mile • Out and About • A Country Mile • Uncategorized / Jon Muth 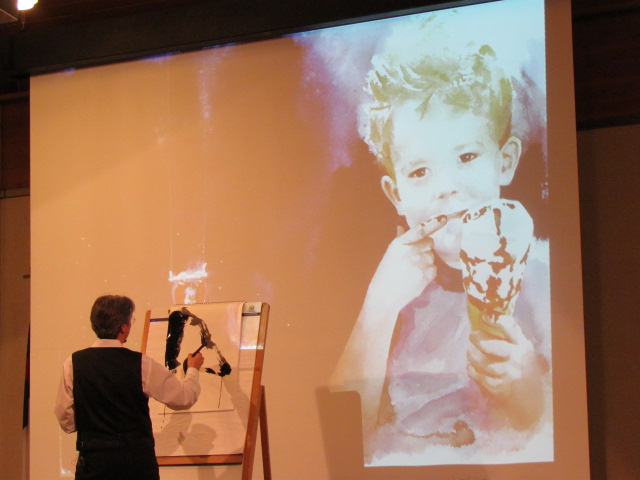 With a stunning watercolor painting in the background, Jon paints for
the Mazza audience, turning a single black line into a Labrador retriever.

Born and raised in Cincinnati, a young Jon Muth headed to New York with $500 and a dream of painting for a living.  When it became clear he would need to eat to survive, he decided to attempt comic book art and graphic novels.  After the birth of a son, Jon’s focus shifted toward creating children’s books that impact young minds.  Come on Rain,  written by Karen Hesse, was Jon’s first book for young readers, and it was awarded the Golden Kite Award from the Society of Children’s Book Writers and Illustrators.

Well known for his Zen series, Zen Shorts, Zen Ties, and Zen Ghosts feature a very large panda named Stillwater.  Jon’s watercolor paintings and ink drawings have graced the pages of many more books for children as well as a collection of poetry selected by Caroline Kennedy.  Jon’s work is influenced by his studies in Japan and England, but likely it is most influenced by his love of children – his and those who read his books.

All of this, and we’re not done yet.  Stay tuned.  Mo Willems is up next.