Home /
Warning: Use of undefined constant multiple - assumed 'multiple' (this will throw an Error in a future version of PHP) in /homepages/2/d259951597/htdocs/new_site/wp-content/themes/Minamaze_Pro/admin/main/options/00.theme-setup.php on line 178
A Country Mile • Country Life • A Country Mile • Out and About • A Country Mile • Uncategorized / The Schoolhouse Saga: Phase On ...

The Schoolhouse Saga: Phase One – Done!

Many folks have been asking about “the little red brick schoolhouse.”  Well, that little building has stirred up the neighborhood in recent weeks.  That’s because in early September it finally became obvious that something was going on.  Since then, the schoolhouse has shed its shed, gained a whole lot of new slate, established its own Facebook page and had its bell rung! Here’s a peek at the progress: 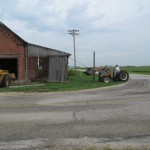 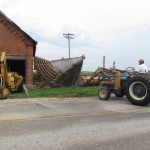 The old shed is coming off.  We once believed this shed was added for machinery storage after the school was closed in 1940.  But I recently learned that it was part of the school as early as the 1920s and maybe before that.  It was for coal storage. 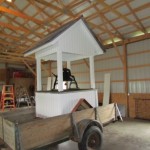 Here’s the beautiful new bell tower built by Kenny.  The bell is from a one-room schoolhouse in Carthage, Indiana. 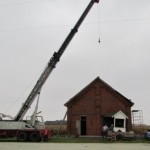 Cranes are amazing.  The usually-quiet corner was all a-buzz with activity and neighbors who stopped to see the bell and tower lifted.

One very special witness was Sally, a 92-year-old neighbor who attended the school as a child.  It was such an honor to have her there! 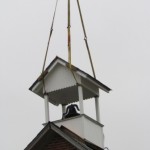 Kenny said it would fit perfectly. And it did. 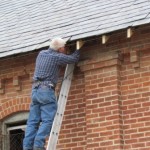 New soffits and eaves going up. 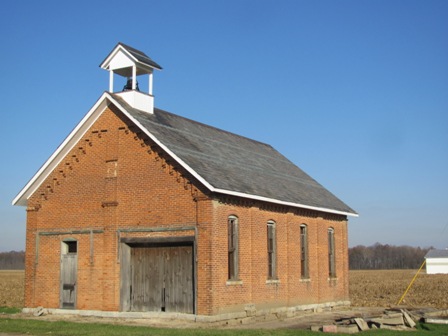 What next?  everyone asks.  Well, obviously windows, doors, brick restoration…. but all that will have to wait.  The Schoolhouse Fund is dry and winter’s on the way.  So, we’ll cover up the now-exposed windows, shut the door and wait for spring.  Looks like I’d better get busy writing!

2 comments on “The Schoolhouse Saga: Phase One – Done!”