Home /
Warning: Use of undefined constant multiple - assumed 'multiple' (this will throw an Error in a future version of PHP) in /homepages/2/d259951597/htdocs/new_site/wp-content/themes/Minamaze_Pro/admin/main/options/00.theme-setup.php on line 178
A Country Mile • Books and Authors • A Country Mile • Out and About / Rocco’s Mazza Debut 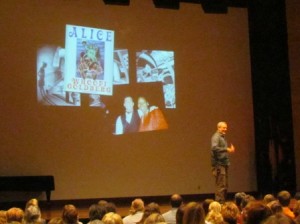 With a background in shellfishing (yes, that would be commercial clam digging) and as a Disney art dircector, John Rocco followed his passion for children’s literature to a successful career as an author and illustrator.

John studied art at the Rhode Island School of Design and School of Visual Arts in New York City. He found inspiration in the works of Uri Shulevitz and Maurice Sendak.  His picture book Blackout won a Caldecott Honor, and he’s well-known for his captivating cover art on Rick Riordan’s  Percy Jackson series.

Look for John’s middle grade novel about a boy who grows up in the commercial shell-fishing world Swim that Rock this spring from Candlewick Press.

When the clock ran out on John Rocco’s first Mazza presentation, he wasn’t ready to stop talking. And we weren’t done listening. But the evil villain dragged John Rocco from the stage anyway.

I’m guessing he’ll be back.