Home /
Warning: Use of undefined constant multiple - assumed 'multiple' (this will throw an Error in a future version of PHP) in /homepages/2/d259951597/htdocs/new_site/wp-content/themes/Minamaze_Pro/admin/main/options/00.theme-setup.php on line 178
A Country Mile • Books and Authors • A Country Mile • Out and About • A Country Mile • Uncategorized / Mazza Friday

It happens every year.  We get to Friday morning of the Mazza Summer Institute and we wonder “How? How can this day even hope to live up to the previous four?”  This past week, we’ve heard from children’s book illustrators and authors whose work could be described with words such as:

We could have called it a week, said our goodbyes, and returned to our homes with contented sighs, singing the praises of Mazza, its staff, and the amazing keynote speakers we’ve heard.

It’s a good thing we didn’t. 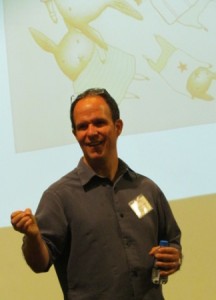 This is author/illustrator Peter McCarty of Hondo and Fabian fame. His sweet cat/dog story won a Caldecott Honor in 2003, and Peter hasn’t slowed since.  With Moon Plane, Jeremy Draws A Monster, and Henry in Love to name just a few, Peter has experimented with several media, confirmed his creative process of starting with the illustration, and discovered that flawed work is authentic work.  What a profound statement.  Well, we sure appreciate Peter McCarty for who he is and the flaws that got him here. 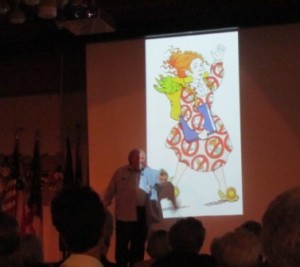 You got it.  It’s Miss Frizzle from The Magic School Bus book and television series.  Oh, and who is that other guy?  That’s Bruce Degen, illustrator and co-creator of the ultra-successful concept.  While many know Bruce Degen in this manner, still others recognize his work on the Jesse Bear series and/or the Jamberry books. What you might not know is that Miss Frizzle was inspired by another great teacher.  Her name?  Miss Isaacs.  Her job?  To successfully teach and motivate a young Bruce Degen.  I’m sure she’s since forgiven him for drawing her with all that frizzy hair. 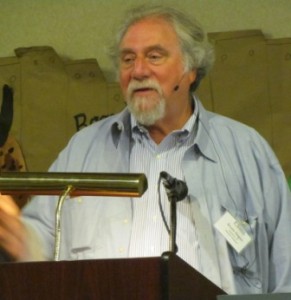 Then, just like that, it’s over.  Mazza director Ben Sapp has called his staff and the Mazza volunteers forward.  Thank-yous are said, and then Administrative Assistant Kerry Teeple is handed the microphone. Kerry sings, her voice the only sound in the crowded room. And her words, the only words we need to say to one another as we part company. 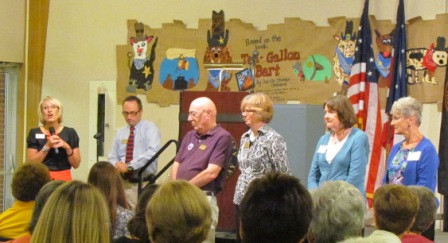 God be with you til we meet again.