Home /
Warning: Use of undefined constant multiple - assumed 'multiple' (this will throw an Error in a future version of PHP) in /homepages/2/d259951597/htdocs/new_site/wp-content/themes/Minamaze_Pro/admin/main/options/00.theme-setup.php on line 178
A Country Mile • Books and Authors • A Country Mile • Out and About / Destiny. Heart. Perseverance.

He wrote his Caldecott Honor book No, David when he just five years old. 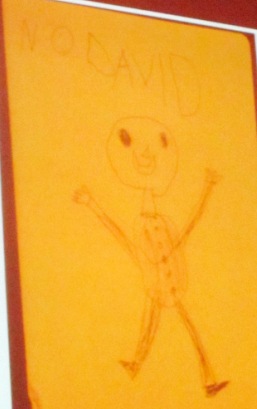 After several years of editorial illustration, producing work that was usually serious and sometimes dark, David returned to the drawings of his childhood and something happened. His palette began to change and his work got lighter and brighter.

David wasn’t the only one destined to show up in picture books. Read his stories and you’ll find his fifth grade math teacher in a terribly villainous role, his neighbor Ray, his daughter as a fairy, and Fergus, his dog, as – well, Fergus the dog.

And, in spite of last-minute obstacles, David made it to Mazza’s Summer Conference. I’m pretty sure I know how it all worked it. Yeah. Destiny.

Ohio’s own Loren Long took the Mazza stage. With a nod or two to “the previous speaker,” Loren told of a young boy who didn’t like to read, but who loved the pictures in storybooks, especially those by Virginia Lee Burton. When a teacher dubbed him “the class illustrator,” he realized that others saw him as the one who could draw.

As an art student, Loren was drawn to American painters Thomas Hart Benton, Grant Wood, George Bellows, and N.C. Wyeth for the heart and soul in their work. He still strives to find the heart in every story he tells.

“You can always feel art,” he says. “When you’re three and when you’re ninety.”

words on a page.

Loren is a fan of happy endings. And Mazza participants got a happy ending to their morning. Because Loren Long shared his heart. 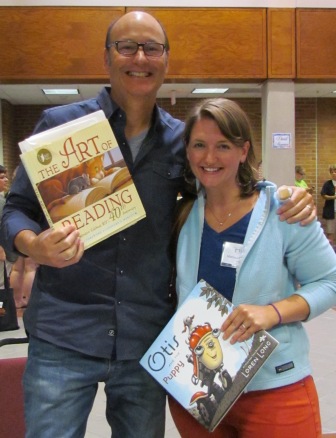 And as if Destiny and Heart we’re enough for one fabulous summer day in Findlay, after lunch Perseverance showed up. It came via author/illustrator Jarrett Krosoczka. (His name’s not as difficult to say as it looks. Crow. Sauce. Ka. See? Easy peasy.)

Jarrett grew up reading a wide variety of books, but the onrs that he loved most were barely recognized as books – comic books. Today, graphic novels, such as Jarrett’s  Lunch Lady books, own a large chunk of real estate in the young readers’ section in any library. It may have taken most of Jarrett’s lifetime, but comics have finally found their place as “real books.”

Not being accepted to his first-choice art school, Rhode Island School of Design, Jarrett reapplied after a year at another school. This time, he did get in. Perseverance.

After art school, the jobs weren’t coming in as he had hoped. But Jarrett never gave up. He sent out 80 postcards a week until one of those postcards landed on the right editor’s desk. That editor asked for a meeting in New York City.  That meeting resulted in Jarrett’s  first book contract. 80 postcards a week. That’s perseverance. 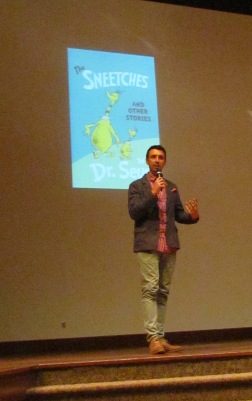 The only tragedy in Jarrett Krosoczka’s appearance today at the Mazza Museum was that he was missing something very special back home.  But I have a hunch it will be okay. Jarrett’s a pretty determined guy. He’ll see Huey Lewis and the News someday. We just know he’ll persevere until it happens. And if not, well, Jarrett, you can always just click here.

What a Mazza Wednesday!

Come back then and find out.