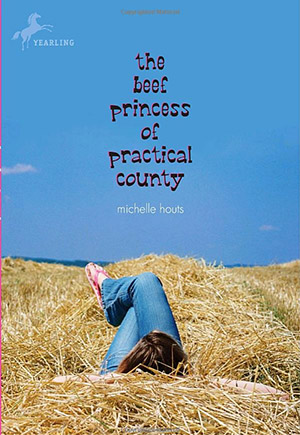 After years of waiting, it is finally Libby Ryan’s turn to shine at the Practical County Fair. Libby is filled with excitement as she and her granddad pick out two calves for her to raise on her family’s cattle farm, in hopes of winning the annual steer competition. Against her father’s advice, Libby gives the calves names, even though both steers will eventually be auctioned off. After a few months of preparing for the Practical County Fair, Libby finds that she is growing closer to her steers with each passing day, and the pressure to win Grand Champion is mounting.

Luckily, Libby can count on her best friend to get her through most of the county fair chaos. Yet once reality sets in and she realizes that her steers will soon be sold to the highest bidder, the chaos in Libby’s heart becomes too much to bear.

NEW and FREE for teachers and librarians... The good folks at Illinois Farm Bureau have created a classroom study guide for THE BEEF PRINCESS OF PRACTICAL COUNTY. Complete with discussion questions, voCOWbulary, and extension activities, this classroom guide is a gold mine for any teacher or book club!

CLICK HERE TO GO TO THE FREE CLASSROOM COMPANION

They were total opposites from the very beginning. It was almost a year ago that I first saw them. It was a sunny Saturday morning in early September, and if I hadn't seen a calendar, I would have thought it was still midsummer. The air was heavy and sticky already at nine-thirty in the morning, when Dad, Frannie, and I piled out of the rusty old pickup at the gate to Granddad's pasture.

I loved the pasture. It always gave me a comfortable, kind of homey feeling. There was just something about acres and acres of green with big brown and black dots scattered all over, slowly moving and munching, like furry lawn mowers, keeping the grass all even and neatly trimmed. But pasture ground was a rare sight in Practical County.

“Northern Indiana farm ground's just too good for pasturing,” I'd heard Dad say many times. What he meant was a man could earn a better profit raising a crop of corn or soybeans than he could growing grass for cattle to eat.

That was why Granddad's pasture was so perfect. With little rolling hills, a winding creek that cut a jagged path diagonally through it, and a couple of acres of woods, it would have been a nightmare to till, plant, and harvest.

As we stood at the gate, all of Granddad's calves loped eagerly over to greet us. All but one. In fact, that one acted downright uninterested in any of us while his herdmates licked our hands with their long, rough tongues.

The week-old calves wrapped their tongues around my fingers and tugged. That's a calf's way of saying, “Pleased to make your acquaintance,” Dad had explained when I was no bigger than Frannie, my four-year-old sister, who at that moment was walking the fence. I watched her teetering, arms out straight, her mess of blond curls flapping behind as she placed one tennis-shoed foot after the other on the top rail. Where she had gotten those blond curls was a mystery. My own stick-straight, mousy brown hair came from the Ryan side. I ponytailed it daily, because there wasn't much else I could do with it.

While Frannie planted herself firmly on a fence post, I stared out across acres and acres of grass still green from summer but chewed to the very roots by the hungry herd inside the fence. The new calves at the gate were checking us out with the same curiosity we were showing to them. I set my mind on finding the calves with the most potential for steer stardom. I was looking for a steer calf that would take the Practical County Fair by storm.

The Practical County Fair. It was nothing short of the best week of the year in Practical County. Everyone in the community pretty much stopped whatever they were doing to come to the fair. It was where for one week you could do what you couldn't the whole rest of the year. Like eat elephant ears. Or sit inside the Grange tent sipping milk shakes and catching up with the neighbors. For some folks, the fair was a chance to show off their finest whatever. To pick that perfect rose and display it in a vase to see if it could earn the blue ribbon. Or wow the judges with a deep-dish apple crumb pie from Great-grandma's secret recipe. For a handful of others, it wasn't about competing but about coming to see it all. The exhibits, the animal shows, the annual Beef Princess pageant, and the neighbor folks who were usually too busy working to visit.

For my family, the Practical County Fair was all about beef.

Dad's family had raised some of the best beef in Indiana for generations. The Ryan family farm, dubbed Ryansmeade by Granddad's Irish parents, sat on four hundred acres located exactly fourteen and a half miles from Nowhere. Nowhere, Indiana. Population four thousand and not really growing much. Now, I've often wondered, Who on God's green earth names a town Nowhere? Because Nowhere is actually somewhere. It's the county seat of Practical County, and it's right smack-dab in the middle of the flattest fields of northern Indiana.

Dad was raised here, and so was Mom. And generations of their families before them. Granddad, Dad's dad, was my only living grandparent, and he lived in the old home place right beside the pasture and about a half mile from my house. The old home place looked like something from a folk-art painting. A square, white, plain-fronted, wooden-sided farmhouse with twin chimneys on each end. Except for new paint every four years and the electric lines that linked it to the poles along the road, that house probably looked just like it did when it was built a hundred years ago. It was old. And it was big for just Granddad, but he had been born there and he'd sworn time and time again that he would die there when the good Lord had a notion to take him.

Just then Granddad stepped out onto the small back porch, slipped his stocking feet into his black rubber boots, and joined us at the pasture gate.

“Good morning,” he said to all of us, calves included. “You here to pick 'em out, Libby?”

“Are you sure about this, Lib?” Dad asked. He still had that hint of doubt in his voice. As if a girl couldn't possibly fill my older brother Ronnie's shoes. Well, maybe I couldn't yet handle those big, square hay bales like Ronnie could, but I was sure I could show a steer just as good, and, I hoped, better.

Looking out over the pasture as the September morning grew into a sweltering day, I knew I had an important task ahead of me. Two of these calves would be mine; I had to be sure we had at least one winner.

I had been to the Practical County Beef Show every year for as long as I could recall, watching and cheering for Ronnie in the show ring. There was so much to take in. The exhibitors as they maneuvered their enormous animals around the ring. The judges, deep in thought as they ranked each steer in their minds. The hush that fell over the crowd just before the champion was selected. I'd seen it all from the stands, and watching my big brother show steers was thrilling. But now that I was twelve, it was my turn. At next summer's fair, it would be me in the show ring. And I had big plans. Not only would I prove to Dad that I could show steers, but I would show the Grand Champion steer as well.

From the Hardcover edition.

From Booklist
“Calves don’t need names,” Libby’s dad warns as she chooses her first two steers to show at the Practical County Fair. Yet in her enthusiasm and determination to bring a ribbon home to Ryansmeade, the family farm and cattle ranch, Libby immediately names the animals Piggy and Mule—and falls in love. How will she ever sell them at auction now? First-time novelist Houts paints an idyllic yet authentic picture of farm life as she takes Libby and her family through the ups and downs of cattle raising and fair-showing with sly humor and a flair for description and characterization. Rural readers and their urban cousins alike will laugh at the Darling sisters—Precious, Lil, and Ohma—who are fine villains, all, and they will cry with Libby as she leads her prize steers to slaughter. Welcome another talented YA author to the fold. Grades 6-9. --Frances Bradburn

Find one for purchase at your favorite independent bookstore: